Newest The Colony Homes and Condos for Sale

Presenting ''Monitor's Rest'', winner of the distinguished Robb Report Best of the Best award for 'Best Amenities'. Nestled into the mountainside at the base of Monitor B...

This contemporary, newly refreshed home with upgrades including all new white oak flooring, complete kitchen renovation with added second island, and new paint in this mo...

Privately situated on 7 acres of sweeping Park City scenery in the exclusive gated community of The Colony at White Pine Canyon, this breathtaking ski-in and ski-out esta...

The Colony at White Pine Canyon Homes For Sale

There is nowhere else like The Colony--a private, gated community in Park City, with the largest ski-in/ski-out homesites in America. Widely acknowledged for setting a new standard for on-mountain living, this 4600-acre "ski-ranch" offers private ski retreats like no other.

The large homesites in The Colony are tucked among the aspens and evergreens along the ski runs of Park City, just minutes from Historic Main Street .

The Colony's winning combination of extraordinary natural beauty (views & trees!), estate size parcels, privacy, and terrific skiing right out your door has attracted some of the most discerning buyers from across the nation.

THE COLONY: YEAR ROUND FUN!

Not just a winter escape, The Colony is a year-round playground. When the snow melts, you have easy access to some of the best hiking and biking trails in Utah, including the famed "Mid-Mountain Trail" one of America's "Epic Trails."

At The Colony you can build your mountain dream home, a separate guest-house and an accessory building (barn or detached garage) along the ski slopes of The Canyons ® Resort.

SALES HISTORY AT THE COLONY

The developers of The Colony just released a new group of of homesites (known as Phase 4B) conveniently located near the entry gate.   Demand is high and availability is limited.

We have The Colony at White Pine Canyon prices and plat maps on file, along with a collection of photos of the fantastic mountain vistas we took on a snowmobile tour last winter.

Homesites in the current phase of The Colony average 8-acres, so you have plenty of space from your neighbors. This offering of lots at The Colony showcases some of the best mountain ridegline views released to date at The Colony.   Imagine sitting on your deck and toasting the last rays of the afternoon sun, surrounded by the sounds of nature and no neighbors in sight. That's what sets The Colony apart.

Looking for a rare and special place to establish a private alipne ski retreat? Look no further than The Colony at White Pine Canyon.

Looking for the perfect home in the perfect place? Chances are you'll want to check here first. 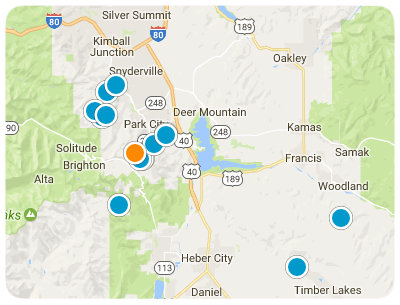