Good thing I dodged the road closure last week caused by the presidential motorcade! It was quite a scene along Kearns Blvd, where Marine One--the President's Helicopter--landed near the Treasure Mountain Middle School in Park City Wednesday afternoon.

President Bush was Greeted by a Mixed Crowd in Park City, Utah 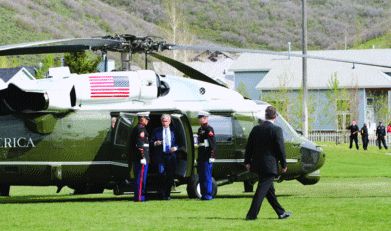 Crowds lined the presidential motorcade route. Many cheered and gave the President the "Thumbs-Up" as the motorcade passed, but others held signs and flipped the President "The Bird" for his unpopular policies.

The motorcade traveled to Stein Eriksen Lodge, where the presidential entourage occupied 60 hotel rooms for the night.

The deep pockets of Park City and Deer Valley residents has made Park City a vital stop on the campaign trail...and not just for the republicans!

Within the past few months, both Senator Barack Obama and former President Bill Clinton were in town raising money.

US Presidents Love Park City For Business and Pleasure

President Bush is the second Consecutive President to visit Park City, Utah while in office.

Park City is a Magnet for High-Profile Visitors

A-list celebrities descend on Park City during the Sundance Film Festival every January.

Park City & Summit County Taxpayers Get Stuck with the Bill!

The Summit County Sheriff's Office, also amassed about $30,000 in additional security expenses during the visit.

The federal government does not refund the Police Department for the costs, meaning local governments will pay the tab from its regular, taxpayer-funded budget.